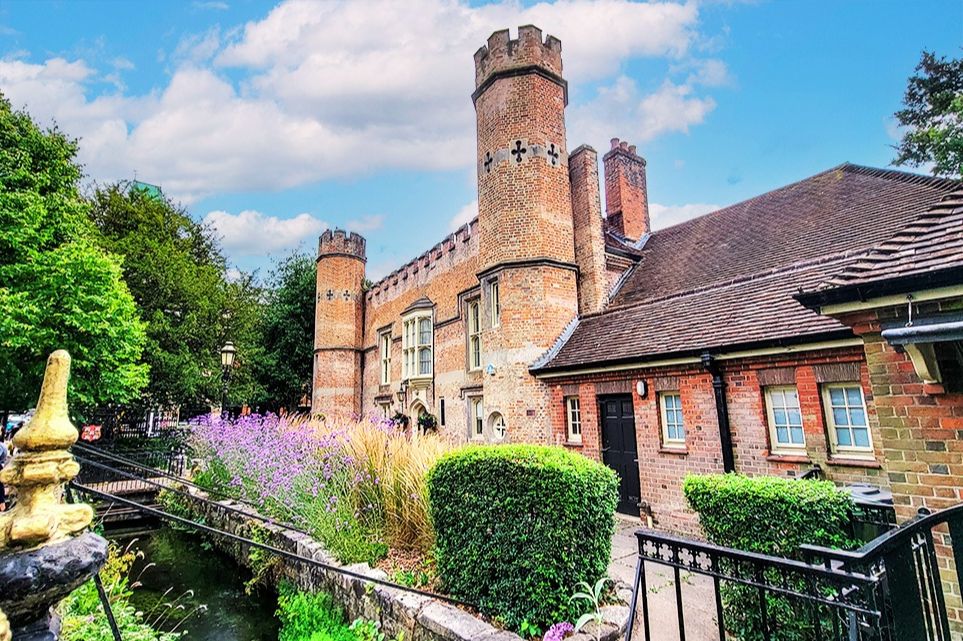 Nestled in the rolling hills of the South Downs is Winchester, the ancient cathedral city, and the once royal capital of England. As we began our tour through England’s countryside, we found Winchester to have the English charm we were looking for in our travels.

Some of England’s oldest institutions and Gothic cathedrals can be found in Winchester.

Winchester is filled with Impressive monuments like the Great Hall of Winchester Castle. The ruins of Bishop’s Palace tell a powerful story of Winchester’s governance from the past, as it was home to kings and a strategic location for Queen Mary and Philip II of Spain to marry before they began their journey in life.

Let’s explore the best things to do in Winchester:

The Great Hall and the Winchester Castle

As you walk towards the Great Hall, you will pass the remains of the ancient Winchester Castle wall. Royalist forces held the castle during the English Civil War, and when the fortress finally fell to Parliamentary troops in 1646, Oliver Cromwell ordered its destruction.

Explore the secret passageway created to surprise an enemy or to return to the secured castle grounds after a long battle.

The masterpiece of Winchester is the Great Hall, built by William the Conqueror in 1067 after claiming victory at the Battle of Hastings.

The Great Hall is one of the surviving medieval aisled halls of the 13th century, which was once part of the magnificent Winchester Castle. One of the most sought-after attractions at the Great Hall is the hanging Round Table, bearing the names of various knights of Arthur’s court.

Historians, poets, and movie producers have been captivated by the Round Table for centuries.

Displays that tell the stories of heroes and villains of the Great Hall can be discovered by visiting the Long Gallery inside the complex.

Stroll through the garden, named after the Queen Eleanor of Provence, wife of Henry III, and her daughter-in-law Queen Elanor of Castile. Admire the many flowers or enjoy the tunnel vine arbor.

Near the Great Hall at the top of the High Street is the historic Westgate Museum, housed inside one of the surviving fortified medieval city gates. The museum tells the history of the Tudor and Stuart Winchester, along with information about the building, which served as a prison for over 150 years.

As you make your way down High Street from the Westgate Museum, you will come upon the Horse and Rider sculpture. This equestrian bronze sculpture by Elisabeth Frink was placed here in 1974.

Exploring Winchester High Street is every visitor’s dream in an English village—with historic charm, unique shops, eateries, and pubs to enjoy. Eastwards from King Alfred to the Bridge over the River Itchen is the City Mill, with a lovely pathway that follows the river to Wolvesey Castle. So take a break from sightseeing, order a scoop of gelato, and relax at the Abbey Gardens.

We spent many days exploring High Street to shop, sightseeing at a historical building, or eating at one of the many restaurants.

Known as the Mother Church of Winchester is the Church of St. Lawrence. It is the only surviving parish church within Winchester’s city walls. The church has an unusual squared design with a fine 17th-century ‘king post’ roof. The church was severely damaged in 1978 but restored and re-opened in 1980.

As you are strolling High Street, you will come upon this historic holy cross monument called the Butter Cross, whose official name is ‘Holy Cross.’ The monument dates back to the mid-14th century and is believed to have been a gift of Cardinal Beaufort, a Bishop of Winchester at that time.

Make sure to stop by the Winchester Tourist Center to get maps and other information about the city. Here you will find some beautiful souvenirs to take home and helpful staff to guide you to any place in town. You can also arrange a guided tour of the city here.

The Guildhall has a long history as it once served as a nunnery and where the wife of King Alfred the Great widow later resided after his death in 899 AD. As the city grew and conducted more local government politics, it needed more space, so the building started adding structures in late 1870. It was to house the police, fire brigade, courts, jails, a museum library, offices, meeting rooms, a public exhibition hall, and a kitchen.

As you walk past the Guildhall towards the East Gate, you will see one of Winchester’s most significant landmarks, King Alfred the Greatstatue, standing 17 feet high of solid bronze casting.

The Winchester City Mill is in the heart of the historic city as one of the oldest working watermills in the UK. Operating as a working wheat mill, the City Mill was rebuilt in 1744. In the 1920s, the Mill became cared for by the National Trust and was restored to complete working order in 2004.

See the waterwheel churning the water from the stream that moves the grinding wheel to crush the wheat into flour. You can purchase whole meal flour at the gift shop or enjoy a baked good while sipping English tea by the river in the café.

The Abbey Gardens are on the site of King Alfred’s Nunnaminster and where the gardens of Abbey House were built in 1751. The city bought the gardens and made them into a public space in 1890, providing an attractive, well-kept public park area with a Doric Garden Temple, part of the river Test, flowerbeds, and an enclosed children’s play area.

If you want to get your steps in for the day, walk down to The Weirs and enjoy the walking trail next to River Itchen. You will find many benches along the way to relax and admire the gardens.

Wolvesey Castle is home to the grand 12th-century palace of Bishop Henry of Blois, brother of King Stephen. This was the home to the primary residence of the medieval Bishops of Winchester throughout the Middle Ages.

The last grand occasion that took place here was in 1554 when Queen Mary and Philip of Spain were married and hosted a wedding banquet.

Winchester College is a public school opened in 1382 by William Wykeham and continues to operate today. It is the oldest school and most prestigious in the world. Currently, the college is transitioning from a boy’s boarding school to a day pupils’ school.

Make sure to visit the Chapel and the War Cloister.

Next door to Winchester College is this pale-yellow two-story cottage, Jane Austen’s final resting house. Austen had been battling an illness and traveled from Chawton to Winchester seeking treatment and having her sister, Cassandra, care for her wellbeing. Jane Austen died on July 18, 1817.

P & G Wells Bookstore is a must-see shop based at Kingsgate for nearly 300 years. The original owner, Joseph Wells, started working as an apprentice and managed the shop in 1845. Later he became the sole owner until 1890, when he died, and his sons Philip and George took over, hence the name P & G Wells. So, if you love books and want to pick up a Jane Austen book, this should be on your list of places to visit while in Winchester.

As you make your way from P & G Wells Bookstore to the Winchester Cathedral, you will come upon Kingsgate, one of the two surviving medieval gates to the city of Winchester built in the 10th century. Next will be the 15th-century Priors Gate with a beautiful Coat of Arms emblem above the archway. Finally, the Winchester Cathedral Gate is near the Pilgrim Hall, which once served as a guest house.

One of Europe’s magnificent cathedrals, the Winchester Cathedral, spans over 1,000 years of rich and fascinating history, including one of the world’s most exquisite bibles, the 11th-century crypt, and Jane Austen’s final resting place.

One of the largest cathedrals in Europe and is part of the Church of England in Hampshire.

Once the seat of the royal power of the Anglo-Saxons and Normans, the church was built around 645 AD spanning over the next 400 years to becoming the most important church in England.

Some highlights of the church are the 17th-century Morley Library bequeathed by Bishop Morley, the Triforium Gallery, the late Saxon glass in England and the jewel in the cathedral’s crown,  and the Winchester Bible.

Expect to spend at least 1-2 hours exploring the church.

During the summer, Winchester brings to life a drove of Hare sculptures, creating a free, fun, family-friendly trail of discovery for everyone to enjoy while exploring the city. Each sculpture is sponsored by a business and is individually designed by an artist. Here is the map to find all the hares throughout Winchester.

Bangkok Bistro is a quaint restaurant with a lovely setting and impeccable food. I ordered the Red Curry Chicken, which was perfectly cooked, and my husband ordered the Basil Stir Fry with Prawns, which was more spicy but delicious. The staff was on point! The location can be found here.

The Bishop on the Bridge

Located near the City Mill on the bank of the river, Itchen, nestled in one of the historic buildings, is the cozy Bishop on the Bridge. Here you will find traditional British pub food made with fresh ingredients. Check their website for the live performance schedule and sit on the patio overlooking the river.

If you are shopping down High Street, you may want to stop at The Ivy Brasserie. The menu offers many options of dishes to choose from, but you must make a reservation.

If you want to enjoy a variety of ale beer and grab a hamburger, visit The Old Goalhouse. The restaurant is in the former governor’s house of the city’s debtors’ prison.

While shopping High Street, you may want a little pick-me-up! Stop at the Winchester Bakery for some coffee or tea and a delicious freshly baked sweet. It is located here.

William Walker is the place to find refreshments, refreshing ales, craft beer, and cocktails in stylish surroundings. Here you can get fantastic cathedral views from the first-floor dining room. The restaurant also offers a wide variety of menu options.

Before attending the Riverdance Show at the Royal Theater, we stopped to grab dinner at Three Joe’s Sourdough Pizza. We had their creamy Mac & Cheese followed by a Roasted Flat Mushroom Pizza. The sourdough pizza crust is the best I have ever eaten!

If you are looking for traditional British food, you must eat at Shoals. I ordered the Harbor Cod with fries, and a choice of condiments-ketchup, tartar sauce, and mayo. The fish was flaky and fresh and nicely fried with a crispy crust. Then, dine outside and enjoy the summer climate.

Winchester certainly became our favorite of all the cities we’ve visited on this trip to England.

Make sure to put Winchester on your bucket list as one of the love English villages in England to visit.