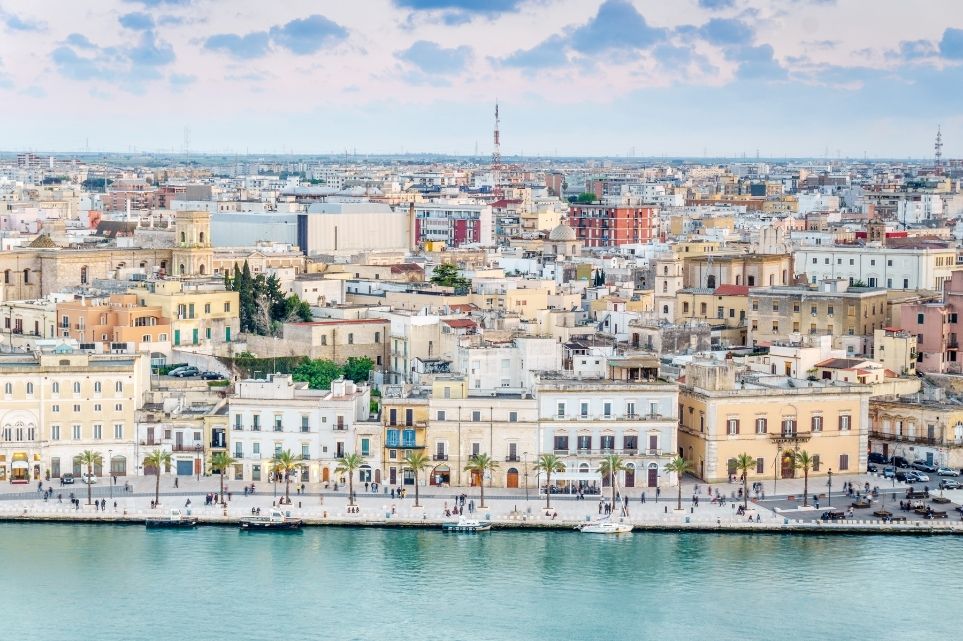 Brindisi, Italy: The Gateway to the East

When you think of traveling to Italy, you most likely will consider Florence, Rome, and Venice. However, this summer, we traveled to Southern Italy and spent time in several small cities like Brindisi. Although Brindisi is not at the top of any tourist destination, there are plenty of reasons you should give it a chance.

Since Roman times, Brindisi has been an important port city known throughout history as the “Gateway to the East.” Perched along the edge of the Adriatic Sea, it’s one of the largest cities in the Puglia region and has one of the most active trading and transport ports in Italy.

Throughout history, Brindisi has been ruled by various empires and kingdoms, including Ostrogoths, Lombards, and Kings of Sicily. During World War II, the city served as the capital of Italy, hosting King Victor Emmanuel III. Brindisi remains a strategic point on the eastern coast and the primary city of the Apulia region.

Offering the Mediterranean climate, the city is a great place to spend your holiday relaxing on the beach, visiting historical sites, eating fresh seafood, and strolling the promenade under the moonlight.

Let’s explore the best things to do in Brindisi:

Built in the 11th century, the beautiful ancient Temple of San Giovanni al Sepolcro is a testimony of the close connection of the Brindisi people and the Holy Land during the Crusades. The exterior is worth examining as the finely carved motifs. Inside are murals telling the passage of men, pilgrims, and knights.

King Charles I of Anjou donated the land for the stunning Church of San Paolo Eremita and was completed in 1322. It is the oldest and most eloquent testimony of Gothic architecture of its time. Fragments of the 14th-century frescoes remain, and 16th-century paintings, including “The Madonna della Concordia.”

Located near the port is the Swabian Castle, home of the royals in ancient times. Fedrick II commissioned them in 1227, built from the old city walls and monuments scattered throughout the city. During World War I and II, the inner Swabian Castle served as a naval base.

St. Benedict’s Church was built in 1089 in the Romanesque style, with cross-shaped cupolas. Inside are three naves, covered by cross vaults set on semi-columns—engraved motifs depicting hunting scenes of two lions and dragons impaled by medieval warriors.

The church dates back to 1619 AD and was commissioned by St. Lawrence that included a convent. The interior has some of the most decorative frescoes on the ceiling, along with floral motifs telling stories of St. Clare. The church is located here.

It is located near Piazza Santa Teresa, a lovely square in the heart of the Brindisi, near the promenade. Church of Saint Theresa was completed in 1697 and initially flanked by the Convent of Discalced Carmelites and today is the State Archive. The façade is designed in the baroque with stone inserts carved faces. Inside are paintings by Diego Bianchi depicting the Salentine costumes of the time.

Things to do in Brindisi Video

Located in the Piazza Santa Theresa is the War Memorial. The memorial is in memory of the 500 soldiers from Brindisi that died in World War I. It was inaugurated in 1933 in the presence of King Vittorio Emanuele III.

Portico of the Knights Templar today serves as the entrance of the Archeological Museum built in 1565, located a few steps from the Cathedral of Brindisi in the Piazza Duomo. A collection of artifacts retracing the stages of the population of the Brindisi region, starting with the Upper Paleolithic up to the Roman Age.

The museum spans several floors and is filled with fascinating antiques, underwater archeology discovered in the sea and artifacts of the imperial ages.

In the heart of medieval Brindisi is the Cathedral Basilica of Brindisi, consecrated by Pope Urban II in the 11th century. It became a pilgrimage destination for crusaders departing from Brindisi for the Holy Land.

The exterior is Romanesque with an elaborate bell tower and a series of opulent stone statues. The interior has a gorgeous stained-glass window and the remains of Saint Theodore. In addition, it has ornately carved marble altars and is considered to be the most beautiful churches in Brindisi.

Located near the port of the city is one remaining standing of two columns. During WWII, the Column was dismantled, fear of being bombed, but was partially restored later. The original top of the Column is in the Palazzo Granafei Nervegna Museum.

The Column rises over the port at 18.74 meters high. The upper element of the Column has an inscription of the city around the 9th century. However, much is unknown about the significance of the columns at the time.

From the Roman columns is stairs that lead you to the promenade. During our visit, an art show was taking place with jewelry makers, painters, and photographers.

Faldetta Archeological Collection is housed in the Palazzina Belvedere on the seawall near the Virgilio staircase and the Roman Columns. The artifacts include Mycenaean, Corinthian, Attic black-figure, and Messapian pottery.

One of the most enjoyable things to do in Brindisi is a stroll down Corso Garibaldi that links to the busy port and the main train station. It is one of the most picturesque walkways and views of the Italian Sailor Monument across the harbor.

Here you will find restaurants, food stalls, vendors, and at night, you will find musicians and dancers performing their talents.

Once owned by the Granafei and Nervegna families, today, the Palace is home to the Municipal Administration of Brindisi, this 16th-century historical building includes an exhibition hall with various art exhibits. Next door, the Ex Corte d’Assise’s complex houses the original capital of the Roman columns. You will also find the Testefiorite Community Library located on the first floor.

In front of the Granafei-Nervegna Palace is the Sttile de Falco Square. In the center of the square is the arch of the Roman age, and behind it, you can see the Verdi theater. To the right of the square are the remains of the city walls.

Brindisi has several impressive religious structures to visit, but the Church of Santa Maria del Casale is one of the city’s most remarkable churches. It was constructed in 1284 in honor of St. Francis from Assisi.

The exterior façade has a gorgeous geometric pattern of stone from Carovigno (a village near Brindisi). The inside of the church has over 1,000 paintings, works of Rinaldo, and stunning frescos on the walls depicting the Last Judgement and other events.

Built on the edge of the island of Sant’Andrea, Alfonsino Castle was built in 1445 on a pre-existing Benedictine convent. The castle served as a defensive fortification and protection for the entrance of the port of Brindisi.

The fortress features several watchtowers, galleries on the ground floor, and extensive walkways. In the castle’s center is an enclosed port that is quite beautiful with a single arch entrance access.

The Monument to Italian Sailors is situated opposite the harbor. Designed in the shape of a “rudder,” the massive stone structure resembles the rudder of a ship standing tall against the landscape.

Built in 1933, the Monument was created to honor all those fallen sailors during World Wars. The memorial includes a bell from the battleship “Benedetto Brin, ” which sank in the port in 1915.

To reach the Monument, you will have to take a traghetto water taxi or ferry. Free to enter, you can climb the six floors of stairs or ride the slow-moving elevator to the fourth floor. You can get a panoramic view of the city from the platform at the top.

Depending on your budget, you will have many options in accommodations. Staying near the city center gives you easy and quick access to all the major attractions. Here are a few recommendations to consider: