Top
Home  >  Cultural Experiences   >  A Guide to Ephesus & Other Sites 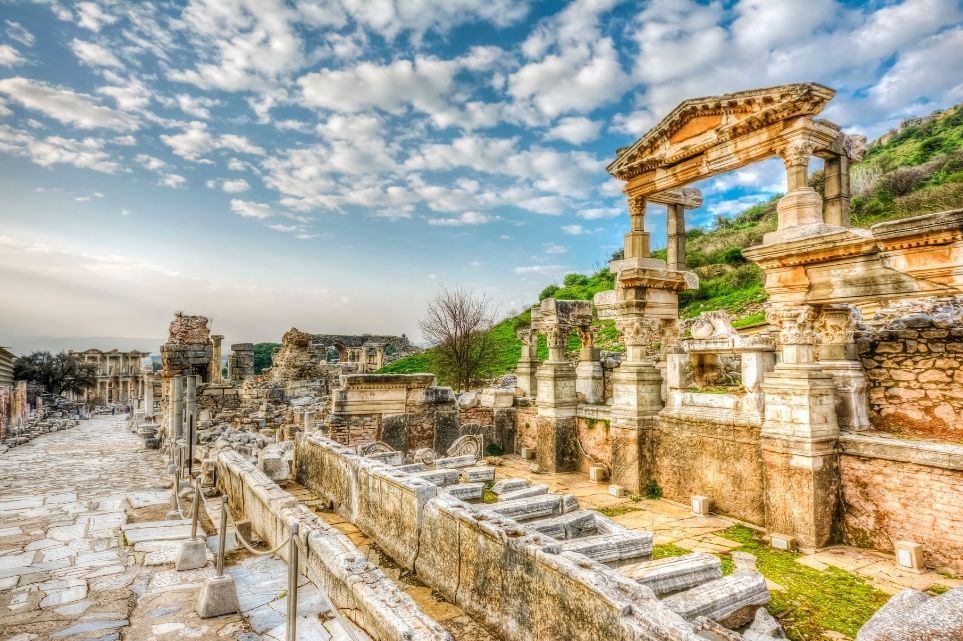 A Guide to Ephesus & Other Sites

One of the top places I have been dying to visit is Ephesus. Drawing in over three million visitors annually, it’s no surprise that everything in the region revolves around Ephesus. It is one of the most well-preserved Roman ruins in the world.

My husband and I were on a road trip to Istanbul and decided to stop at Ephesus. We did not have plans to overnight it in Selçuk but wish we did, as Selçuk is a laid-back town with cobblestone streets and several other sites besides Ephesus to visit.

Although we are still amid a pandemic, however, we were permitted to travel but the number of tourists at Ephesus was light and the weather was cool which made walking this vast city enjoyable.

Built-in the 10th century B.C., Ephesus was one of the 12 cities of Ionia, an ancient Greek district on the west coast of Asia Minor. The city had a unique and diverse timeline between the time it was built and inhabited. It was a large city (over 200,000 inhabitants) and an essential port for trade routes. It was known as one of the seven churches of Revelation, which is mentioned in the Bible. When it came under the control of the Romans in 129 BC under Emperor Augustus, it was then when it truly developed and prospered.

The Great Theater & The Odeon Theater

With a seating capacity of approximately 24,000 people, it is the largest theatre in Anatolia and possibly the largest in the ancient world. Built-in the Hellenistic Period (3rd century B.C.), and was enlarged during the Roman times to what it is today.

The Great Theater is where the events of Acts 19:23 – 41 in the Bible took place. A silversmith by the name of Demetrius started a riot against Paul for speaking out against Artemis. Because Paul spoke out against worshiping her, the silversmiths worried they would lose income the silver shrines they sold to visitors. They took Paul’s companions into the theater, but the apostles pleaded with Paul not to go. Eventually, a city clerk dispelled the crowd, encouraging them to solve the legal system instead of a public assembly as the men had committed no crime.

At the time of our visit, the theatre was undergoing renovations. We were still able to enter and get a magnificent view.

The Romans built the Odeon Theater. It seats 1,400 people, so it is much smaller than the Great Theater. Before it was excavated, the entire theater was underground.

The Temple of Hadrian was initially built in 138 AD and re-erected from pieces found dating back to the 4th century. Murals on the temple tell the story of Ephesus. The arch inside depicts a human figure, believed to be Medusa. It was dedicated to Emperor Hadrian when he came to visit Ephesus from Athens. Later, it became a Christian church. The Temple of Hadrian sits across the street from the Terrace Houses.

The main attraction in Ephesus is the Library of Celsus, which Gaius Julius Aquila built to honor his father, the governor of Asia named Celsus. It was built in 117 AD, holding up to 12,000 scrolls, making it the third-largest library of the ancient world.

Visitors can get up close to the facade and see the four statues (which are not the original) that represent wisdom, knowledge, virtue, and judgment. The original statues are in the Ephesus Museum of Vienna.

Due to the elaborate details of this building, it’s believed the family was wealthy and able to carry out such an intricate building project.

I spent a lot of time walking around the walls of this library, admiring the artwork and many inscriptions seen throughout the site. Because it is so popular with tourists, you may have to wait your turn to get some good pictures.

One of the main three streets in Ephesus, Curetes Street, which is paved with marble, runs between the Library of Celsus and Hercules Gate. Along this street were shops, statues, fountains, and homes of some rich Ephesians.

Named after the relief of Hercules on the entrance, which depicts holding the skin of the Nemean lion. These two columns and other pieces displaying the flying Nike believed to be the only remains of the original gate found.

The Memmius Monument is located on the north side of Domitian Square. It was built by Memmius, the grandson of Dictator Sulla, during the reign of Augustus. On the blocks, you can still see the figures of Memmius’ father and grandfather.

This Roman Basilica is in the northern part of the State Agora. It is 160 meters long and has three aisles and a nave. The Basilica was used for a stock exchange, commercial businesses, and meetings of the Law Courts.

The fountain was constructed by Sextilius Pollio, a rich Ephesian, in 97 A.D. Water was brought in from three primary sources, traveling through aqueducts and distributed from the fountains by a branching system of baked clay pipes.

Although you can’t see the statues of Trajan anymore because it was moved to the Ephesus Museum, they once stood on the façade overlooking the pool surrounded by columns and statues of Dionysus, Satyr, Aphrodite, and the family of the Emperor.

Other Things to Do near Ephesus

Besides the ruins of Ephesus, there are several other options to explore nearby.

Before entering Ephesus, we drove up Mt. Koressos to check out Mother Mary’s House (Meryem Ana Evi). The journey up the mountain is very scenic.

It is believed that this is the last house where the Virgin Mother Mary lived before Her Assumption. It is said she was taken here by John the Apostle shortly after the Crucifixion.

I must say we were a bit disappointed with the site. Although the shrine or home is very tiny and has some beautiful Mother Mary figures, I felt like it really wasn’t worth the trip up the mountain.

A newly renovated building is the Ephesus Archaeological Museum with remnants of the Temple of Artemis and finds from Ephesus’ most glorious Hellenistic and Roman periods on display.

Although there is not much left, the Temple of Artemis is one of the Seven Wonders of the Ancient World. Only one pillar out of the original 127 remains standing. It only takes a few minutes to see it, and it is not too far off the beaten path.

This is the temple that Paul spoke out against in Acts. When he spoke out against this temple, some of the silversmiths started a little riot against him. They sold silver shrines to visitors from all over who came to worship Artemis and worried it would hurt their bottom line. Entrance is Free.

The Basilica of St. John

Located in the heart of Selçuk, the Basilica is believed to be the burial site of St. John the Apostle. Built-in the 6th century, it is believed that John went to Ephesus in the later years of his life and took Mary, the mother of Jesus, with him. While there, he wrote the books of the Bible attributed to him other than Revelation. He lived here, was sentenced to exile on Patmos (where he wrote Revelation), and then returned when he was pardoned. He lived out the rest of his life preaching here according to early church sources and died here. There was a church built on this site before this to honor the apostle. However, it was torn down for the Basilica to be built.

If you choose to visit the Selçuk Castle, you enter through the Basilica of St. John.

Built in 1374-75, İsabey Mosque is one of the oldest and most unique mosques due to its asymmetrical designs and unusual locations of windows, doors, and domes, built by Anatolian Beyliks. Beyliks were small Turkish principalities governed by a bey, or Turkish chieftain, formed in the 11th century.

Though open to tourists, İsabey Mosque is still a functioning mosque, so please be mindful of this when you visit. Entrance to the mosque is free.

Cave of the Seven Sleepers

The cave became a popular spot based on a story told about seven young men that hid here to escape religious persecution. They fell asleep and emerged from the cave 300 years later. The story gained traction when an early bishop spread the tale. Free to enter.

The visit to Ephesus will genuinely have a lasting impression because of its architectural designs, craftsmanship, and the technology of ancient times. Even though I have visited numerous ancient cities throughout Turkey, each one teaches me something of the past. If you enjoy history or interested in exploring Bible stories, Ephesus should be on your list.

Should you go on a guided tour?

I recommend considering hiring a guide or rent an audio guide at the entrance of Ephesus. All guides are licensed tour guides in Turkey and require extensive studies and exams; therefore, they know the subject matter well.

The ruins of Ephesus open at 8 a.m. all year long. In the summer months, from April to October, the ruins close at 7 p.m., and from November to March the doors close at 5 p.m. 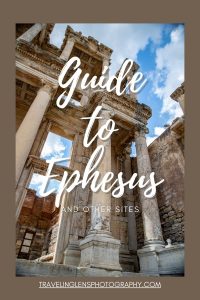 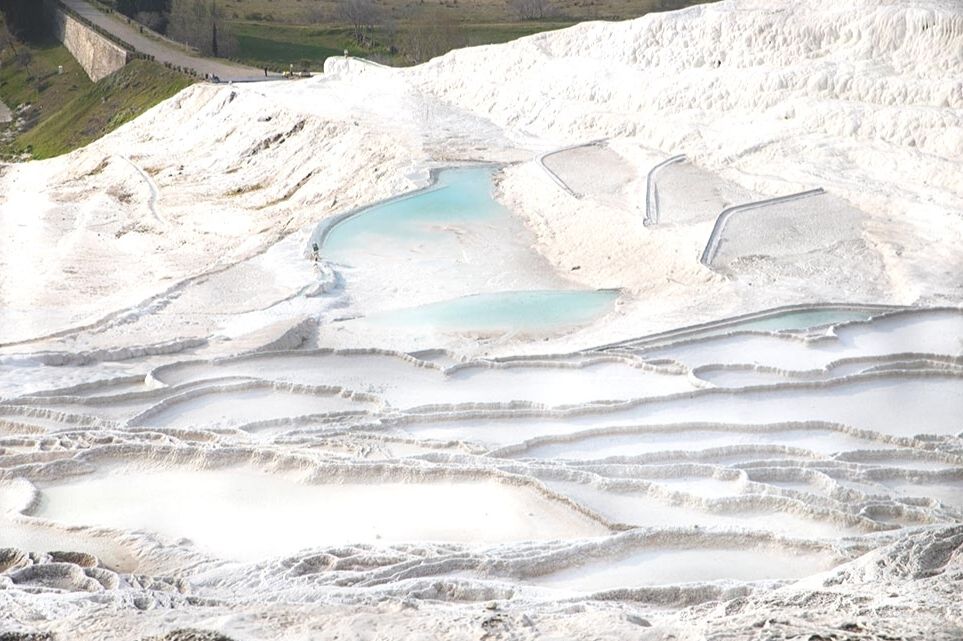