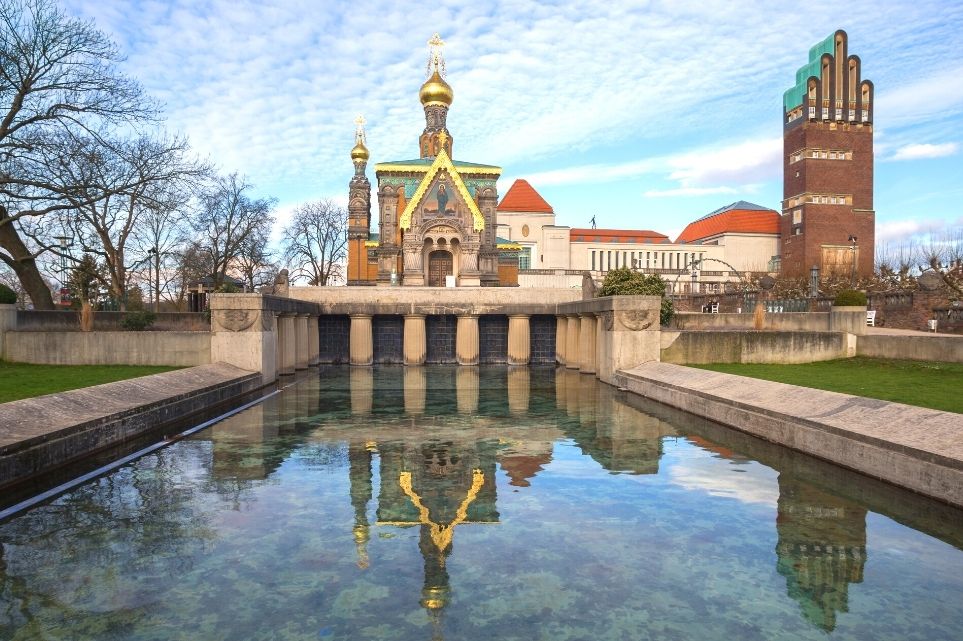 Best Things to Do in Darmstadt (Germany)

While pet-sitting in Frankfurt, Germany, we decided to take a day trip to Darmstadt, about 24 miles south of the city. This small town is a major center of scientific institutions, universities, and high-technology companies. Darmstadt also seats the world’s oldest pharmaceutical company, Merck, and is the largest employer.

In the late 19th and early 20th centuries, Darmstadt was the major center of the Jugendstil artistic movement, which you can see in the architecture throughout the city.

The wealthy German nobles, the Landgraves of Hesse-Darmstadt and the Gran Dukes of Hesse, lived in the city, leaving art, porcelain, and home furnishings found in many museums. Duke Ernst Ludwig is known for creating an Art Nouveau wonderland. The city gained international prominence and remained one of the wealthiest cities in Europe.

This artist colony within Darmstadt was created by Duke Ernst Ludwig in 1899 from a collection of famous designers and architects to bring new energy and life to the city.

Walking around in Mathildenhöhe neighborhood is like walking in an outdoor architecture bonanza of the fantastic building, gardens filled with unique sculptures.

Things to see in Mathildenhöhe:

Hochzeitsturm is referred to as the ‘Wedding Tower.’ When Grand Duke Ernst Ludwig announced the engagement to Princess Eleonore zu Solms-Hohensolms-Lich in 1905, he commissioned this widely visible monument to commemorate the event.

The tower is nearly 50 meters high and was built in 1908. The façade is built with dark-red brick, stylish bands of windows curving around the corners, and a five-spired crown. The unusual crown has earned a nickname as the ‘Five-Fingered Tower.’

Near the entrance hall on the ground floor are walls of decorated mosaics. One of the images represents a young pair of lovers embracing and kissing each other against a blue-sky background.

At the time of our visit, a wedding was being held here, and we were unable to view the Wedding Room or the Prince’s Room. I encourage you to make it to the top and see the panoramic view.

This museum gives you the inside story of Mathildenhöhe’s Art Nouveau exhibitions from 1899 to 1914. As you enter, a very catchy façade of a pair of sculptures representing man and woman. In addition, many decorative pieces such as furniture sets, sculptures, glassware, ceramics, textiles on display were produced in or near Darmstadt and set up by Ernst Ludwig.

Architect Leon Benois built the elaborate gold onion dome Russian Orthodox Church was built between 1897-1899. It is located in the Mathildenhöhe neighborhood, near the Hochzeitsturm.

Darmstadt was the birthplace of the last Empress of Russia. Alexandra Feodorovna, the wife of Tsar Nicholas II, was born in Darmstadt. She converted to Orthodoxy before marriage, and the royal family wanted a place for the Tsarina family to have space for prayer when visiting Darmstadt.

In front of the Russian Chapel is the Lilien Becken (lily pond), a fountain. The lily pond was built in 1914. Sculptures of “Mary and Joseph” can be seen, reflecting the religious theme from the Russian Chapel looming in the background.

Hessian State Museum is one of the largest museums in Germany, offering different collections of arts, cultural and natural history. Depending on your interest, you are sure to find an exhibit that interests you!

On display is a collection of paintings from artists such as Pieter Bruegel to Arnold Gerhard Richter, showcasing over 400 pieces. The medieval treasure art and ivory work are among the most impressive of their kind.

The museum was established by Grand Duke Ernst Ludwig of Hesse in 1924. The museum takes you back in time through a historical journey of numerous royal families of Darmstadt. The rooms are beautifully decorated with furniture and handcrafted art pieces. Much of the artwork is from the old Hesse family palace.

Near the Marktplatz, walking towards the Hessian State Museum, is Landgrave Ernst Ludwig statue called the Ernst-Ludwig Platz. Within this plaza, you will find the White Tower. Throughout the year, you may discover festivities and other performances held here.

The historic defensive tower is the last remains of the old city fortification that protected Darmstadt from 1330. When Landgrave Ernst Ludwig decided to build his new suburb neighborhood, he leveled the city walls and left the tower standing.

In 1704 the White Tower was converted to a bell tower to call the citizens to prayer. However, during WWII, the building suffered severe damage from bomb raids. The State of Hesse later had the tower restored and added a floor and clock.

This monument is in honor of the more than 2,000 fallen and missing soldiers. The lion is located near Ernst-Ludwig Platz, near the northern castle wall.

It is said that the pain the lions expresses over the sacrifices is representative of the state. The two broken arrows, stuck in the lion’s chest, with its paw raised from the final blow is a symbol for “the fighting, powerful and heroic defeat.”

The inscription at the base reads: “To the Lifeguard Regiment/and its brave sons/ and its traditional regiment/ the Inf.-Rgt. 115 1936-1945.

In the center of Darmstadt is Marktplatz, near the Residenzschloss. It served as a place for merchants to sell their goods. Darmstadt’s weekly and annual markets have been held here since 1330. Located in the center is a lovely fountain. The pedestrian-only zone is skirted with many shops and restaurants.

The Stadtkirche Darmstadt is the main Protestant church of Darmstadt. It is the oldest church in the city. The church was first mentioned in the 12th century; however, much of the structure dates to the 17th century. Legend has it that a tunnel ran from the palace to the crypts in the church to allow the princes to visit the graves without having to walk through the public marketplaces. Many monuments from the past ruling families within the church dating between 1576 -1972.

Standing in the center of Luisenplatz is Ludwig Monument, nicknamed “Langer Ludwig” (Tall Ludwig). The monument stands 40 meters tall and is named after the Grand Duchess Luise von Hessen-Darmstadt, the wife of Ludwig I.

The Neoclassical monument was built in 1841 and inaugurated in 1844. For a small fee, you can scale the 172 steps to reach a platform under the statue at the height of 30 meters.

This large one-dome structure was built between 1822 – 1827, serving as the main Catholic church of Darmstadt. Inspired by the Pantheon in Rome, it also has a 24 ft. opening in the roof, illuminating the interior. The blue eye symbolizes the illuminating invasion of the divine into the world.

The church continues to host services, so please be respectful.

The Art Nouveau monument with a granite base was built in 1904 by sculptor Ludwig Habich. It is also known as Alice Obelisk.

Darmstadt’s largest and oldest park dating back to the 1500s, was later redesigned in 1766 in the English style by the request of the Landgrave Caroline, and then 1811 Grand Duke Ludwig I opened the park to the public.

Noteworthy monuments at the start of the 20th century, such as the Goethedenkmal, can be admired while strolling the park. Another beautiful sculpture is of Princess Elisabeth of Hesse.

You can visit the Grand Ducal Hessian Porcelain Collection at the park’s far end. In 1908 Ernst Ludwig shared his collection of porcelain and other ceramics to the public at the Rococo Prinz-Georg-Palace, dating to 1710. The museum is open Friday – Sunday from 10:00 – 17:00.

This bizarre apartment building looks out of place in the historical city of Darmstadt and is something worth checking out.

Friedensreich Hundertwasser designed this apartment building in his inimitable, quirky style in 1998 and was completed in 2000. This 105-apartment complex is 12 stories high. Hundertwasser did not like straight lines and called them “the devil’s tools.”

He loved nature and atop this spiraled building is an incredible forest-beech maple and lime trees. You will find not one of the windows is shaped the same and many have tree limbs growing right through them.

The resting place of many members of the Hesse-Darmstadt family is on a beautiful hill with Park Rosenhöhe. The area was once used as a vineyard during the 1800s. In the 1820s, a Neoclassical mausoleum was built for Princess Elisabeth Grand Duke Ludwig II’s daughter, who passed away as a child.

At the highest point within the park is the Rosarium, with more than 200 rose species in bloom at different times of the year. In addition to the many beautiful roses, you will also find contemporary works of art sculptures within the landscape.

In the countryside to the northeast of Darmstadt is a sublime Baroque palace first raised during the reign of George I, the Landgrave of Hesse-Darmstadt, in the late 16th century.

Jagdschloss Kranichstein was a hunting lodge on the edge of the forest and connected to a spacious deer park and entertained generations of Landgraves and Grand Dukes on their court hunts.

In the 18th century, it became Landgrave Ludwig VIII’s main home when it got a Baroque theatrical makeover.

The palace is divided between a hotel, restaurant, and museum, all about the court hunts.

The European Space Operations Center is the main mission control center for the European Space Agency. The center’s purpose is to operate spacecraft in orbit, design and build space technology and manage space missions.

If you’re keen to know more, there are regular tours of the ESOC. 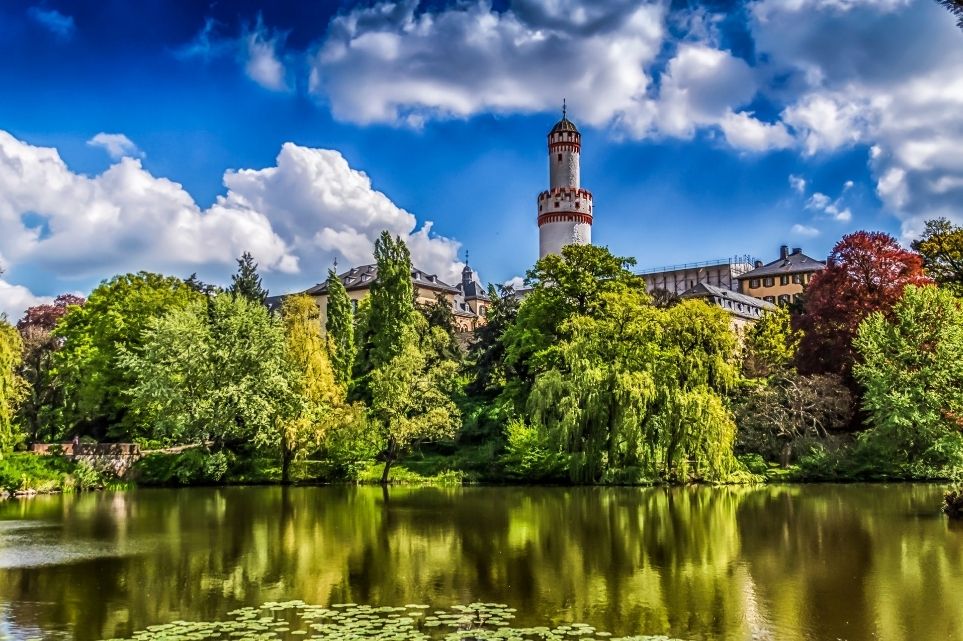 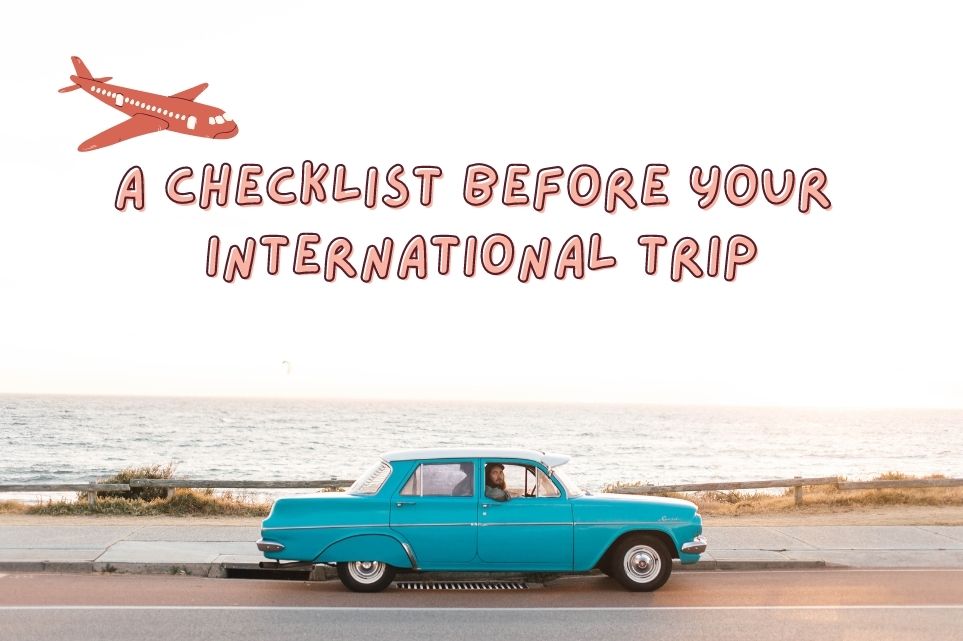