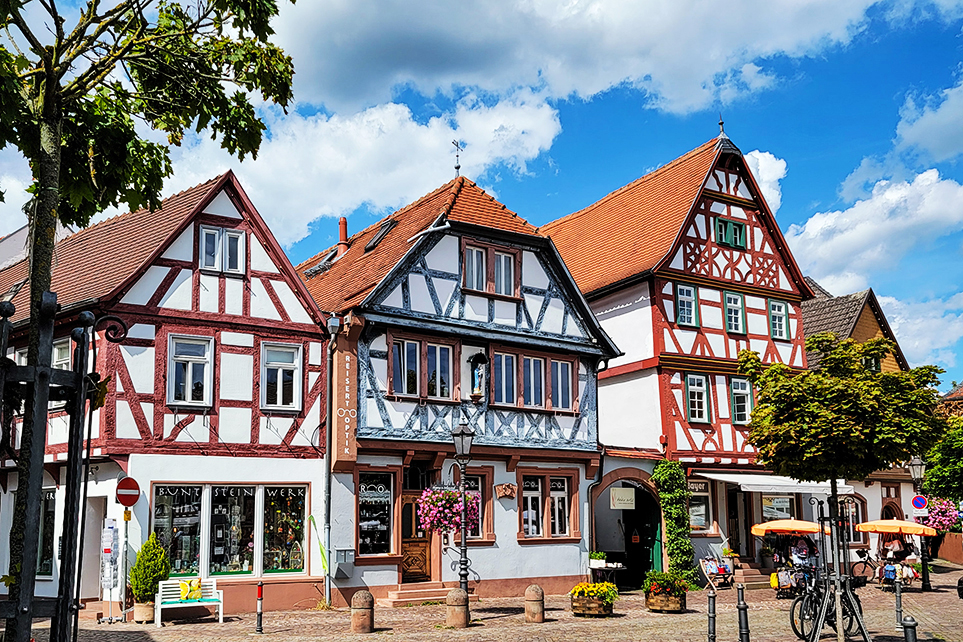 While hanging out in Frankfurt for a couple of weeks, I scanned Google maps for a nearby town for my next day trip adventure.

One place that popped up is Seligenstadt. A small, perfectly preserved medieval town, located about 25 kilometers southeast of Frankfurt am Main.

Even after doing a little research, I didn’t find much about it, but I was still curious to explore.

This eccentric town- with a population of only 20,000 people is packed with more intriguing sights than you can imagine. To say the least, Seligenstadt had plenty to offer!

Its’ origins date from 100 AD, when 500 Roman soldiers were stationed in a fortress here. Then, in 260 AD, fierce Germanic tribes destroyed the fort.

Later, during the Carolingian period—Charlemagne deeded the town to one of his most dedicated scholars and advisors, Einhard, as a reward. Einhard wrote Charlemagne’s biography, called Vita Karoli Magni (Life of Charles the Great), regarded as one of the most precious literary bequests of the Middle Ages.

Documents state that the bones of two martyrs, Marcellinus and Peter, were stolen in Rome and transferred to the basilica in Obermuhheim (the city’s original name). This led to the name change to Seligenstadt, meaning “Blessed Ones’ Town.”

After the takeover by the Archbishop Albert of Mainz, a new order was brought to the town, limiting the townsmen’s rights. As a result, Seligenstadt suffered greatly during the Thirty Years’ War as the Swedish king spared it from complete destruction.

Through secularization, the monastery was dissolved, and the town became a part of the Offenbach district.

Seligentstadt is a cultural melting pot where you will find several different European influences making their way into many of the dishes served in restaurants.

The first historical landmark you see when entering the town of Seligenstadt is the white-water tower built in 1938. Although it no longer functions as a water tank, it has become one of the cultural monuments of the Hesse district.

As we made our way to the center, we noticed this intriguing little chapel with some of the most beautiful pink hydrangeas in full bloom at the entrance. Although I couldn’t find any information regarding the chapel’s history, I found it most unique in its architectural design.

The Promenade of the Main River

We began our adventure in Seligenstadt with a stroll down a narrow avenue between the river and the old city wall. Here you will see the Main ferry that brings countless tourists and locals from the Bavarian main side to the Hesse side of the river.

The day we arrived, it was a bright sunny day. Travelers are soaking up the sun while licking an ice cream cone from the famous Bella Gelato Italiano as they stroll the gardens overlooking the Main River.

Near the ferry pier is the Palatium, the ruins of Staufische Electoral Palatinate from the 12th century. The main front wall is all that remains of this historical site with double and triple arcades and red sandstone arches.

Here are the highlights not to miss in Old Town:

The Market Square is Seligenstadt’s old town center, with many culinary highlights skirting the square. As we circled the area, I felt like I was in a 17th-century time warp as my eyes surveyed the architecture surrounding me. No doubt the maypole and water fountain were the meeting spot for merchants, artisans, fishermen, pushing carts of fruits and vegetables selling to locals.

Wanting to take the mood of this charming square, we requested a table at Promis Pinseria and ordered a lemon spritzer to quench our thirst along with green salad and pasta while watching people go about their day.

Within the circumference of Market Square is the neoclassic Town Hall, built in 1823. The modest white façade with five inset arched windows, adorned with a bell tower, is a vital piece of the town’s history.

Nearby is the Einhard House built in the 1500s with beautiful half-timbered decorations. Elaborate bay windows accent the second level of the home. As you admire the façade, notice the two crests with faces carved into its corners and windows framed by colorful planter boxes filled with flowers.

An important cultural landmark for Seligenstadt is the Romanesque House built between 1186 – 1187. It is believed to serve as a bailiff’s office for the emperor Friedrich Barbarossa. The ancient stone house with two brick archways is the oldest building on the Marktplatz.

Klaa – France is picturesque half-timbered quarters in Seligenstadt.  What makes this neighborhood so interesting is the background: After the Thirty Years’ War, terrible famine and the Plague caused the hometown of Leonard Colchon, abbot of the Selignestadt monastery, to disseminate. So, Colchon, a native of Wallonia, brought Catholic compatriots from his homeland to Seligenstadt and settled them in the northwestern part of town. These Belgian province settlers brought their French lifestyle with them, and that is how the people of Seligenstadt soon referred to this part of the town as Klaa-France.

A short distance southeast of Seligenstadt is the site of an older molted castle. You may ask, “what is a molted castle?” This refers to castles whose area is surrounded by natural waters.

Abbot Francis II Blöchinger had the molted castle built during his tenure (the 1700s) to serve as a garden house for festivities.

One hundred years later, the castle came into state ownership through secularization, but since 1972 the property has had a private owner who restored the castle for tourists to enjoy.

If you love contemporary art with a rich history, visit the Gallery of Kuntsforum, an old house built in 1327. It is the second oldest half-timbered house in southern Hesse.

Four gate towers and six city wall towers were built around the town’s perimeter to protect the people and the royals within Seligenstadt. Today, only one of these gate towers is still standing, marking the border to the old town.

The former Benedictine Abbey is one of the most precious gems to see in Seligenstadt. It is one of the most well-preserved monastery complexes in Hesse. Founded in the 9th century, it was a fully operating monastery where monks lived and worked until secularization in the 19th century. Einhard, a founder, artist, and scholar, built the Benedictine Abbey. Monks lived here for almost a thousand years.

Surrounding the monastery is approximately 30,000 square meters of the garden, reconstructed to historic structure and horticulture.

After much renovation to the abbey, it has regained its baroque splendor making it Seligenstadt’s most visited spot.

The Regional Museum is housed with the monastery, offering a glimpse of life as a monk and many historical artifacts to examine.

Seligenstadt’s iconic landmarks is St. Marcellinus and Peter Church, once known as Einhard Baslika. It was the monastery church until the secularization transformed the abbey church into a Roman Catholic parish in 1812.

What makes this building exquisite, is the three-aisled pillars that rise out of the roof, resembling the basilicas of Rome. This orange/red brick building became Seligenstadt’s religious epicenter. Throughout its history, numerous precious relics from Rome were brought here, attracting pilgrims worldwide.

Unfortunately, the Thirty Years’ War severely affected the monastery and church, leaving little resources to help sustain the continued renovation. After the abolition of the monastery, the church underwent significant structural renovation due to severe structural problems. Then came WWII causing more damage and again requiring the church to be repaired.

Even with all the renovations and ownership changes, the church is a unique historical treasure.

When you are in Germany, you must drink beer! It seems that every town we have toured has its own brewery or two. Today, we stopped at Glaabsbräu Brewery, one of the oldest breweries in southern Hesse.

Founded in 1744 by the Glaab family and has been operating for nine consecutive generations. The beer is famous for its dark brown Vitamalz Malzbier, a non-alcoholic malt drink. Today, Glaabsbräu would be regarded as a mid-size brewery. However, this brewery is unique because artifacts of old wooden brewing barrels and ancient buildings make the atmosphere much more enjoyable.

Seligenstadt is a charming little German town with an interesting past. I wish we had made plans to spend more time hanging out here. I recommend at least one or two nights be a must!