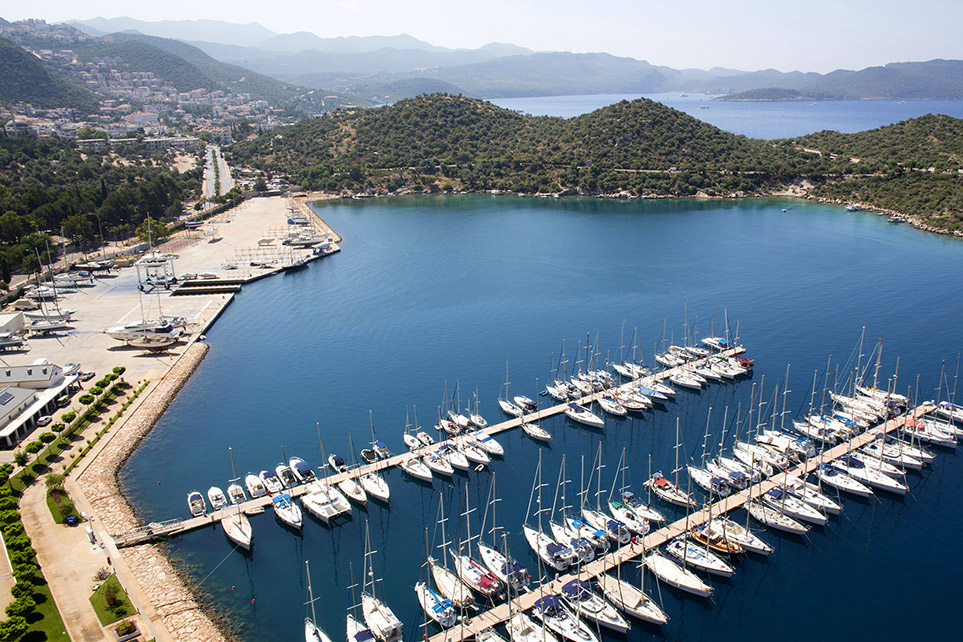 When tourists think of Turkey, the first city that comes to mind is Istanbul or Cappadocia, but the southern coastline of Turkey is just as impressive. A picture-perfect town called Kaş (the “ş” is pronounced like “sh”) is located on the Turquoise Coast of Turkey and is surrounded by ancient Antiphellos ruins as well as some of Turkey’s best beaches.

Kaş is a cute hillside Mediterranean town has a 6km-long Cukurbag Peninsula that extends westward from the town-square. In the city center you’ll find many shops and restaurants overlooking the harbor. As you walk the cobblestone streets you will see whitewashed houses adorned with colorful bougainvillea.

Kaş was founded by the Lycians during the Roman Empire and served as the port of Phellus. The town was the site of many battles and in 1923, due to the Greco-Turkish War, the majority of the population abandoned the town. It wasn’t until 1990 when UK and German citizens decided to make the city a tourist destination and brought it back to life.

The 168km drive from Antalya to Kaş took us about 3 hours along the winding road and gave us breathtaking scenery the entire way. To get to Kaş, most tourists from Europe fly into Dalaman Airport and use one of the many transfer services to Kaş. If flying isn’t your cup of tea, bus service is available from most major cities. Alternatively, you could rent a car and drive down the same stunning highway we did!

The Ancient City of Myra once contained the temple to the Goddess of Artemis Eleuthera but was destroyed in the 4th century AD. Although there aren’t any historical records of Myra before the 1st century, it’s believed that the city was well established before the first recording and served as the capital city of Lycia.

Due to a terrible plague, Muslim raids, flooding, and earthquakes, Myra was mostly abandoned by the 11the century. The largest Greco-Roman theatre in Lycia is in Myra and much of the inscriptions and double-vaulted corridors are still visible today.

Along the hillside are the two main groups of famous rock-tombs. Although today the tombs are plain, they once displayed colorful paintings of red, yellow, and blue. Most of the tombs are from the 4th century BC, and have paintings depicting the life of those buried under the tombstone.

After exploring the Ancient City of Myra, we drove a short distance to tour the Church of St. Nicholas. It was once believed to be the tomb of St. Nicholas and the remains within the church were taken to Italy. The church was destroyed and rebuilt in 1042 but the original building was built in the 6th century AD.

St. Nicholas was a popular bishop in the 4th century AD. Famous for his miracles and known for his kindness, several legends depict his kind and giving nature that led to the development of Santa Claus.

In 1862, the church was restored after surviving numerous floods. The church continued to function until the Greek Orthodox community of Demre was forced to leave in 1923.

The church floors have beautiful opus sectile,   and a luxurious marble mosaic floor design. Vibrant frescoes detailing the many miracles of St. Nicholas are on display. A sarcophagus, thought to be the original burial place of St. Nicholas, can also be seen within the church’s walls.

The church has been a  popular pilgrimage center throughout its entire existence. In 1982 it became registered with World Heritage Sites by the Turkish Ministry of Culture. It is ranked third most important Byzantine structures of Anatolia.

As we strolled down the hill from our Airbnb, we wandered through Likya Park. Walking the streets is the best mode of transportation as this quaint town is small and you’re unlikely to get lost. The city center is full of souvenir shops selling trinkets and tour companies offering day excursions. If you’re hungry, or just need a snack, you’ll find many cafes here too.

As you walk along the harbor you can admire the many fishing and tour boats docked in their slips. This is the best place to book a day trip and negotiate a rate with one of the captains. Also, you can find colorful murals painted along the harbor wall. At the end of the harbor is a small lighthouse you can check out too.

Located near the city center, on Uzun Bazar St., is the Lion’s Tomb (or Tomb of the King). The tomb, which was typical of the Lycian period, resembles a miniature house with small windows is a great place to capture a photo while walking and shopping.

WEST OF THE CITY

On the west side of Kaş is the Antiphellos Amphitheatre. Although this theatre is not enormous, it’s the only theatre overlooking the Mediterranean Sea and surrounded by olive trees. Created in the 1st century BC from limestone, the theatre has twenty-six rows and is currently used for public events. You can visit here at night and get a spectacular view of the bustling city lights or the moon shining off the sea.

After a morning stroll through the city of Kaş it was time to head to Kaputaş Beach (18 km from Kaş) for an iconic turquoise coastline view. I could not get over how bright blue and clear the water shimmered on this sunny day. This small beach is considered one of the best beaches in Turkey.

We rented a couple of chairs and an umbrella for 30TL ($4 USD) for the day. Not only do you have beautiful water to enjoy but the cliffs that frame this beach are utterly breathtaking. I suggest snapping a few photos as you walk down the stairs to Kaputaş Beach.

Since the beach is protected, you won’t find any resorts or restaurants along the coastline. Only one government operated bar offers drinks and fast food so you might want to bring your own picnic.

Snorkeling is an option off the shoreline, although you may not see many fish, but it’s still fun and you’ll appreciate how truly clear the water is. We swam near the rocky cliffs and saw a few schools of fish nibbling on the rocks below. Floating devices are not needed because the Mediterranean sea has a very high salinity (salt content) which makes it easy for your body to float without the aid of external floatation.

Many Turks believe the sand on this beach has healing and rejuvenating properties and you may see people cover themselves head-to-toe. Sand is considered a natural exfoliant and a great source of magnesium.

Day 3: Tour Ancient City of Patara and the Sunken City of Kekova

Patara was the main port of Western Lycia and the birthplace of St. Nicholas. On the drive down the Xanthos Valley towards the ruins, you will notice remains of many ancient structures up on the hillside. This area is still being researched by archaeologists and new discoveries are occurring all the time.

Patara was once a flourishing maritime and commercial city on the Mediterranean coast of Turkey. Patara was founded by Apollo’s son, Patarus, and after surrendering to Alexander the Great in 333 BC, was passed down to Ptolemies and renamed Arsinoe. Later, it was spared from the massacres of the region and annexed by the Roman Empire in 43 AD.

Patara is mentioned in the New Testament as the place where Paul of Tarsus and Luke changed ships. On the outside walls of the ruins are stone sarcophagi bearing inscriptions. The theatre was built in the reign of Antonius Plus containing 30 rows of seats. Outside the theatre, tall columns can be seen in the garden area and a fishing vessel is docked outside the theater.

While at the ruins, you can take a short walk to Patara Beach as well. We ended up not visiting because we had just left Kaputaş beach.

Our next stop was the Sunken City of Kekova. A 30-minute drive from Kaş, there is a small fishing village called Kaleucagiz where we boarded a boat ride to Kekova Islands to see the Sunken City. (Full day private boat trips are available from Kaş but we had other plans for part of the day).

During the 2nd century, Kekova was flooded and destroyed due to an earthquake that opened up a channel to all water to flow through. As a result, Kekova became an island and now is only accessible by boat. In the following centuries, several small islands formed near Kekova revealing the ruins of an ancient city. These islands later became the villages of Kalekoy, Ucaguz, and the ancient town of Simena.

Tour boats had just started operating again after CoVid-19 had calmed down and we were able to get a private tour with Captain Durali on his boat Merhaba for 300TL (4 people) for 3 hours. Cpt. Durali shared the ancient stories of the region and stopped several times along the way for us to swim in the clear turquoise water. The water was pristine and we were able to see fish, sea urchins, sea turtles, and a couple of octopus.

I highly recommend taking an early morning trip to Kekova while the water is still calm. The wind picks up in the afternoon causing the water and the boat ride to be somewhat rough. Other options, like full day and kayaking tours, are also available. For us, three-hours seemed to be enough time for us to see the Sunken City and enjoy the surrounding nature.

Other Things to Do in Kaş

If you plan to stay longer in Kas, there are several other things to see and do:

Where to Stay in Kaş?

Many options are available in Kas but we opted to stay in an Airbnb called the Kasinn Apart Turuncu. Although the apartment isn’t in the city center, it’s an easy walk down the hill or just a few Turkish Lira for a cab. It overlooks the city below and out onto the Greek island of Meis.

Where to Eat in Kaş?

Since we were staying in an Airbnb, we prepared breakfast in the apartment. During the day when we were out exploring, we would nibble on a snack to hold us over until dinner. We must’ve picked one of the best restaurants in Kas to dine at, the Masuk Devr-I Meyhane. This multi-deck restaurant offers a spectacular view of the harbor while enjoying the cool breeze. The atmosphere was superb, and the staff was friendly and helpful.

The menu offers a variety of mezes and entrées to select from. I ordered the grilled octopus along with a bed of arugula and seasoned onions with sumac. It was splendid. The service and the meal were so impressive we decided to return the following evening for another amazing meal. 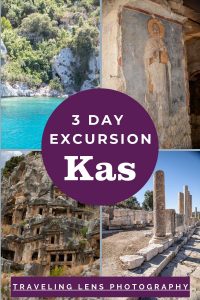 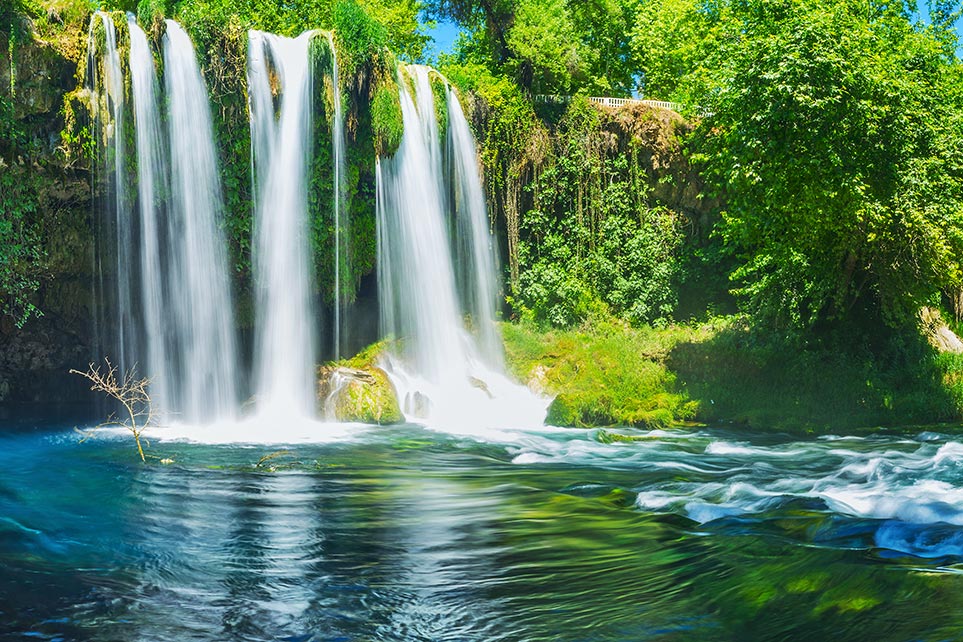 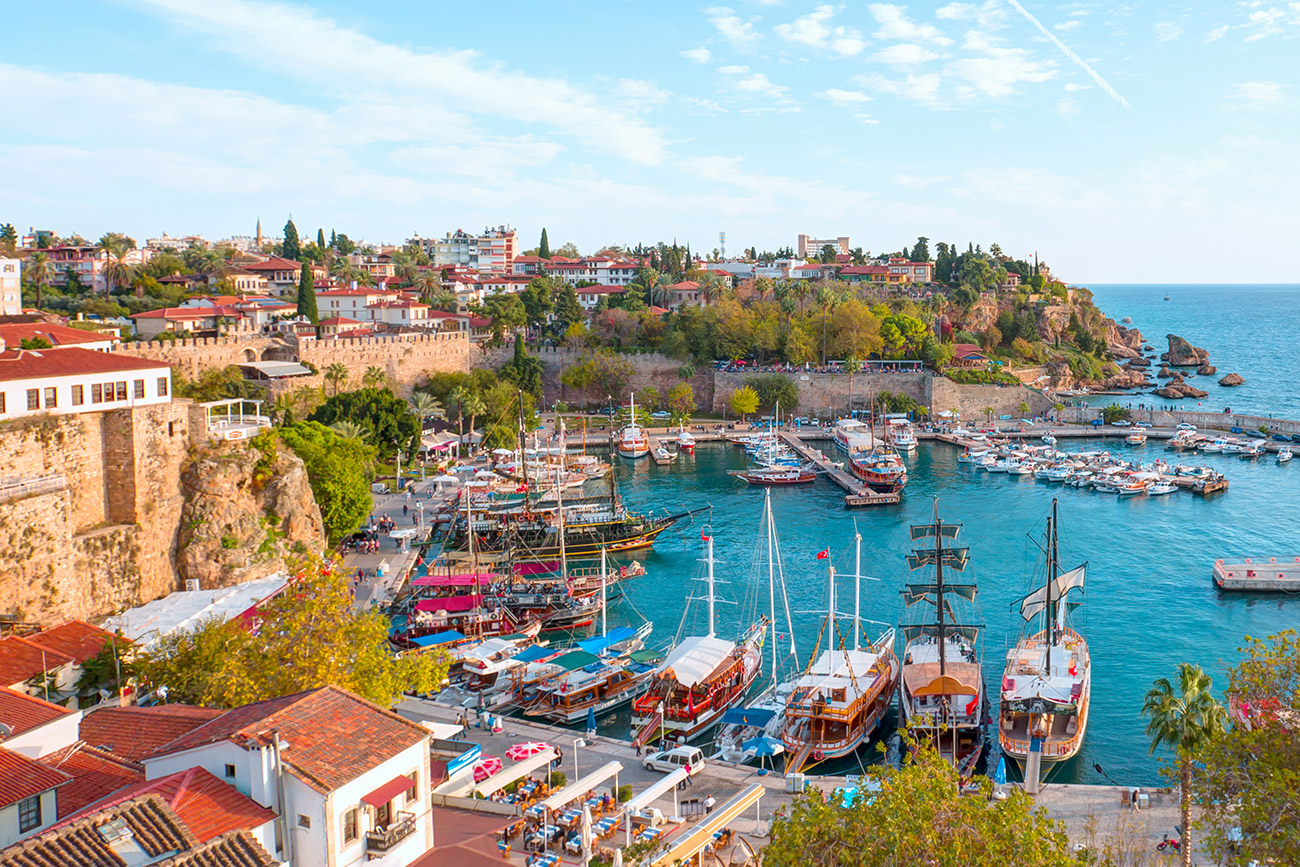