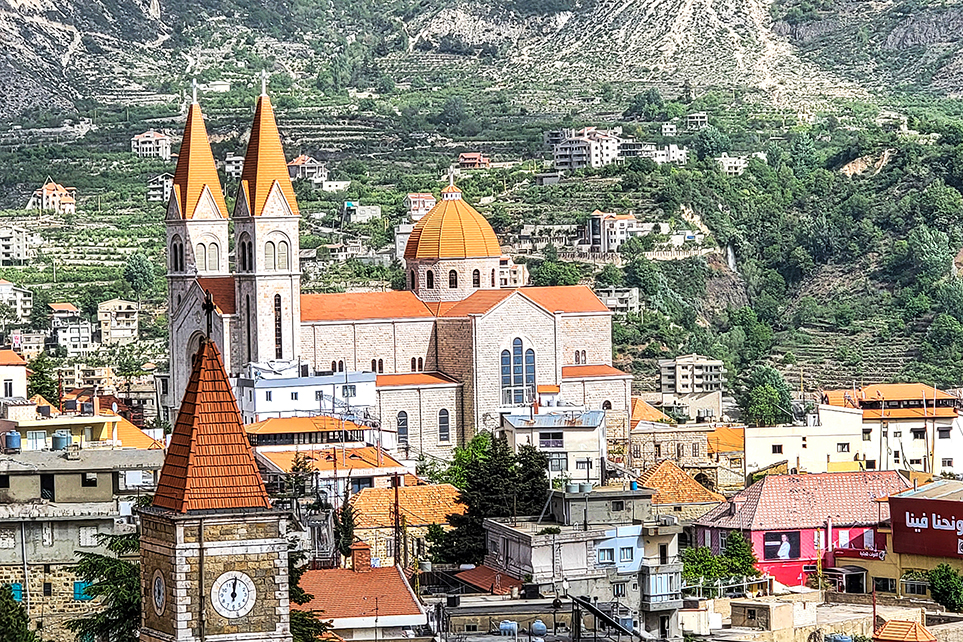 I am excited to have visited where my husband loved spending his summers as a child in the city of Ehden, approximately 40 km northeast of Tripoli. After Ehden, we continued to Bsharri to see the Cedars of God. The Cedar tree is the national symbol for Lebanon’s flag.

Ehden has been inhibited since 1000 BC. Up until the 16th century, the Ehdenians lived year around here until people from Zgharta discovered it and established it as a summer retreat to escape the long hot days.

Today, festivals and concerts are held in the city center during the summer. As a result, it has become a popular resort town packed with natural beauty, famous restaurants and cafes, hotels, and holiday villas. It is said that the natives of Ehden have a reputation for warm hospitality and a gentle personality. Therefore, my husband’s mother loved spending her summers here!

There are many famous churches and monasteries in Ehden:

Saint Mema Church is the oldest Maronite church in Lebanon, constructed in 749 CE on the remains of the pagan temple built by Macedonians and dedicated to the ‘god of sun.’ Saint Mema is the patron of shepherds and nurses; he was executed at Caesarea Cappadocia, at the age of 15 years old, during the persecution of the Roman Emperor Aurelian.

According to historical references, the church is one of Lebanon’s most magnificent churches. It is believed the stones from the pagan temples were used to construct the church. As the church deteriorated, a new church was built in 1855 but was suspended until 1870. It was finally completed by 1898.

At the highest point in Ehden stands the church of Saydet el-Hosn, built over the remains of a Crusader castle,  where you can get a fantastic view down to the coast and Tripoli. Two Maronite churches adorn this hill with an ancient and modern church dedicated to the Virgin Mary, “Our Lady of the Fortress.”

In 1283 the Mamluks pulled down the fortress and the ancient church, but it was rebuilt using the stones of the old fort. They rebuilt it again after the earthquake of 1705.

The New Church was Inaugurated in 1989, adorned with a statue of the Virgin Mary with open arms standing high on top of the hill.

Saint Moura Church was built in 1339 and witnessed the Lebanese Maronite Monastic Order found in 1695.

The Saint Sarkis Monastery overlooks Ehden, Kfarsghab, Bane, and Hadathe el Jebbeh. Known as the ‘Watchful Eye of Qadisha,’ dedicated to Saints Sarkis and Bakhos. The monastery belongs to the Lebanese Antonin Maronite Order. The construction of the monastery dates back to 1473.

The Monastery of St. Antonio’s Qozhaya is the birthplace of the first printing press in the Middle East. Some historians believe it was built in 1584. Its first printed text is The Book of Psalms, which can be found at the University of the Holy Spirit library in Kaslik. The Lebanese Maronite Order renovated the printing press at the start of the nineteenth century. However, its activities were halted at the beginning of the 1860 war. It resumed printing in 1871 but stopped again at the beginning of World War II. The location is here.

Ehden is the birthplace of illustrious Lebanese thinkers and patriots. These include Patriarchs Jean Makhlouf, George Omaira, the “Light of the Oriental Church,” and Stephan Doueihi, a great philosopher and archbishop of the Maronite Church who translated the Holy Scriptures to several languages. He is referred to as “the father of Maronite history.” The statue of the latter stands in the city center. Gabriel al Sahyouni [1577 – 1648] was the private tutor of Louis XIV of France. Youssef Bey Karam [1823 – 1889], who many consider a Lebanese patriot, fought for an independent Lebanon. His tomb and statue are found at Saint George’s Church, which is an outstanding example of old architecture. Ehden was also the birthplace of two Lebanese presidents: Suleiman Franjieh and René Mou’awwad.

A visit isn’t complete unless you explore Al Midan, a historic public square surrounded by typical Lebanese architecture and filled with cafes, patisseries, and restaurants. Take a stroll in the early morning, and you can smell the Turkish coffee with cardamom. At noon have a leisurely lunch under the shade of the colored umbrellas. After a cup of tea, nibble on local sweets up at the pass. In the evening, the shisha smoke rises above the sound of merriment during dinner. Then, end the day with a sip of sahlep to warm you up.

WHERE TO EAT IN EHDEN

Al Ferdaws Restaurant – Hidden within the trees overlooking the stunning views of the Mountain of Lebanon is a lovely paradise in Ehden. Al Ferdaws Restaurant is one of the oldest restaurants today. Opening over half a century ago, Ferdaws is still a family-owned and managed restaurant that serves the best Lebanese cuisine in town.

From Ehden to Cedars of God are many charming cities and breathtaking natural beauty to cherish.

As we continued the drive along the windy road to Mountain of Cedar, we passed the city of Bane. We stopped to see the stunning St. Georges Church.

Saint George is one of the most venerated saints in the Eastern Orthodox Church. He is immortalized in the tale of George and the Dragon and is one of the Fourteen Holy Helpers.

As we continued on our drive, we noticed a spring flowing out of the ground. Water sources are found everywhere, jetting from the earth. Nearby is the Hasroun Natural Springs, a common visit by tourists. Hadchit can be found here.

Next is the city Bsharri, where you can visit the lovely Our Lady of Bsharri Church.,the Convent des Peres Carmes, a more than 100 years old sanctuary, and the Gibran Museum are filled with paintings and belongings of author Gibran Khalil Gibran.

Near Qadisha Valley is the forest of the Cedars of God, home to a small number of remaining ancient Lebanon cedar trees. These timbers were exploited by the Assyrians, Babylonians, Persians, and the residents of Canaan-Phoenicia. The wood was especially prized by Egyptians for shipbuilding, and Solomon used it for his temple.

The cedar tree became a symbol on the Lebanese national flag representing power and longevity.

The forests began disappearing because these trees offered one of the most treasured building materials of ancient times. The Forest of the Cedars of God houses around 375 of the only remaining Lebanon Cedar trees.

Interestingly, the Cedars of Lebanon are mentioned over 70 times in the Bible. They are even called “the trees of the Lord” that “He planted.”

Near the entrance to the park are many vendors selling handmade plaques, key chains, and other decorative items made from cedar trees. You can walk on your own through the park and admire the cedars and several wooden sculptures. The trail is well marked, and I recommend wearing sneakers or boots.

Near the Cedar of God is the Holy Valley, Qadisha Valley, which is home to several monasteries carved and built into the rocks on the side of the mountain. Early Christians who were fleeing persecution established themselves in this region. If you enjoy hiking, you may find guided tour groups or day trips to explore the ancient monasteries and churches of Qadisha Valley. 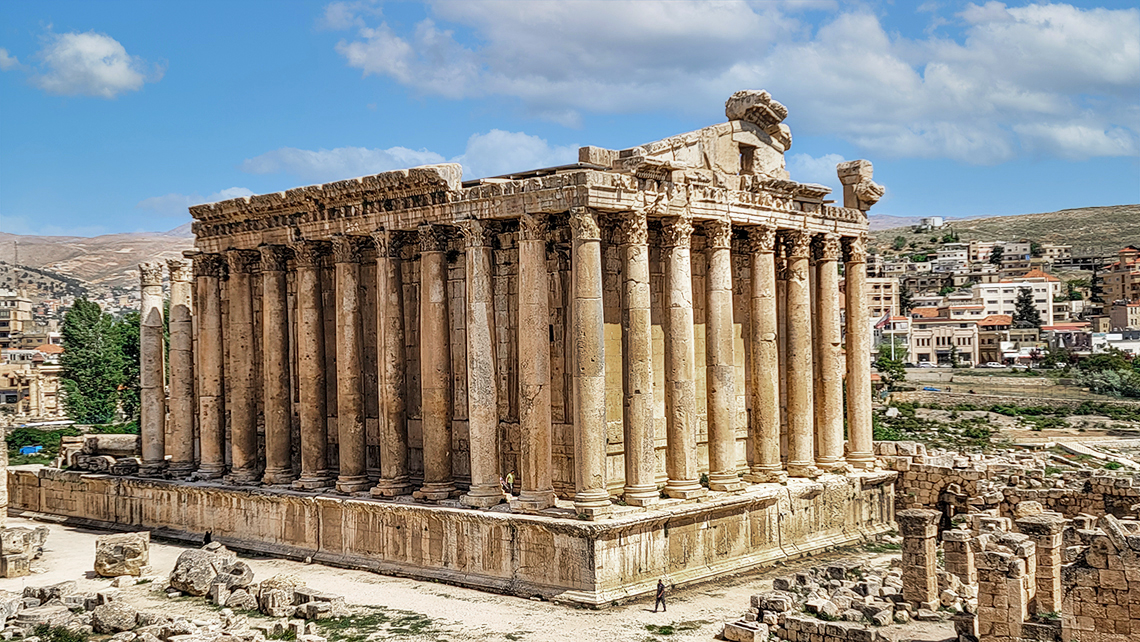